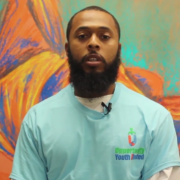 AmeriCorps is a Pathway from Prison to Success

As an AmeriCorps alumnus, I am deeply concerned about the president’s proposal to eliminate AmeriCorps. Simply put, AmeriCorps changed my life and has helped provide a pathway out of poverty for countless other young people like me. I share my story in hopes that, when it comes time to vote on a budget, Sen. Lindsey Graham, Sen. Tim Scott, and Rep. James Clyburn recognize that cutting this patriotic program would be an enormous blow to some of our most at-risk youth and communities.

I grew up admiring those who supported their fast lifestyles with illicit activities. Despite exposure to this world, I became the first man in two generations of my family to graduate high school and enroll in college. However, the party scene caught up with me: before the age of 20, I was sent to jail on drug and gun charges. It was toward the end of my 32-month incarceration that I first met J.R. and learned about AmeriCorps.

Ladine “J.R.” Daniels conducted outreach in the prison. He was a former convict who, like many with a record, struggled to find employment after his release. He explained to me that things turned around for him when he enrolled in the AmeriCorps program at the Sustainability Institute in Charleston.

During his AmeriCorps service, J.R. provided energy auditing and retrofitting services to low-income homeowners. Through this experience, he gained workplace exposure and in-demand skills in the growing energy efficiency sector. He engaged with the community and developed a sense of purpose that kept him from returning to his old ways.

At the time I met him, J.R. was operating his own landscaping business and working to start a home weatherization company.

I reconnected with J.R. upon my release from prison and followed in his footsteps: I became an AmeriCorps member at the Sustainability Institute. I earned professional certifications in home energy efficiency, gained hands-on job experience, and developed skills in communication and teamwork. The money-saving home weatherization services I provided as an AmeriCorps member made a real difference in the lives of elderly and low-income Charlestonians. With every homeowner I helped, I felt a growing reconnection to the community I once hurt.

When I completed my prison sentence, I was one of America’s 5.6 million “opportunity youth.” This population is defined as unemployed and out-of-school young adults who are full of potential, but face barriers to success. My barrier was my criminal record. AmeriCorps is what helped me overcome my past and prove my responsibility to society. I built a résumé and used my AmeriCorps Education Award money to enroll in college.

It is estimated that young adults who are not in school or working cost taxpayers $93 billion annually in lost revenue and increased social services. Youth “fall off track” for many reasons, including simply living in areas that lack jobs and good schools. People from low-income communities often grow up hearing nothing but bad news about their neighborhoods. Through national service programs, young people see their potential, gain relevant skills that employers want, and realize they have the power to be positive change-makers in their own communities.

It’s not just opportunity youth who benefit from AmeriCorps. The Sustainability Institute also runs an AmeriCorps program to help returning veterans train for careers in energy efficiency. Across the state, AmeriCorps members at other organizations tutor in schools, feed the hungry, respond to disasters, increase access to public lands, and do much more.

My message is that AmeriCorps is not a handout: it’s hard work. It’s patriotic. The modest living stipend and Education Award I received in compensation for my service to Charleston’s low-income homeowners put me on track to success. Eliminating AmeriCorps would hurt opportunity youth like me, and hurt people like the homeowners I served. To Sens. Graham and Scott, Rep. Clyburn, and South Carolina’s other elected officials in Washington: please fight to protect AmeriCorps.

Timothy Gunn is a member of the National Council of Young Leaders, the steering committee for Opportunity Youth United.

This post originally appeared in the Post & Courier (South Carolina), on April 8, 2016. It is reprinted here with permission.