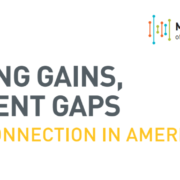 The Latest on Youth Disconnection in America

Through national and state reports, thematic briefs, and interactive websites, Measure of America aims to breathe life into numbers, using data to create compelling narratives that foster greater understanding of our shared challenges and greater support for people-centered policies. The Project was founded in 2006, and became an initiative of the Social Science Research Council (SSRC) in 2008. In addition, they provide easy-to-use yet methodologically sound tools for understanding the distribution of well-being and opportunity in America and stimulating fact-based dialogue about issues we all care about: health, education, and living standards.

Since the Measure of America first wrote about youth disconnection half a decade ago, public awareness of both the plight and the promise of young people who are not in either school or the workforce has grown by leaps and bounds. Support for alternative school-to-work pathways like apprenticeships and career-technical education have seen a resurgence, the business-led 100,000 Opportunities Initiative met its goal to hire 100,000 disconnected youth well ahead of schedule, and at the time of writing, the Opening Doors for Youth Act of 2016 was introduced in Congress to make available significant federal investment to reconnect young people to school and employment.

Thanks to a greatly improved economy and efforts like those described above, the country has made real progress in tackling this important issue; this is good news we should all celebrate. But challenges remain: 4.9 million young women and men are still disconnected from the educational and employment opportunities required for rewarding, productive lives. If all disconnected youth lived together in a single state, that state would have roughly the population of South Carolina or Colorado.

Promising Gains, Persistent Gaps: Youth Disconnection in America takes a look at who comprises this remaining group, what particular challenges they face, and what strategies have been shown to work.

Measure of America aims to breathe life into numbers, using data to foster understanding of our shared challenges and support for people-centered policies. They care about human development—the process of building people’s capabilities, improving their well-being, and expanding their opportunities to live freely chosen lives of value.

Young adulthood is when people develop many of the capabilities required to live a good life: knowledge and credentials, social skills and networks, a sense of mastery and agency, an understanding of one’s strengths and preferences, and the ability to handle stressful events and regulate one’s emotions, to name just a few. Measure of America is thus concerned with youth disconnection because it impedes human development, closing off some of life’s most rewarding and joyful paths and leading to a future of limited horizons.

Disconnected youth are young people between the ages of 16 and 24 who are not in school and not working. The youth disconnection rate tells us a lot about the opportunities available to teens and young adults from different racial and ethnic groups and in different parts of the country. Understanding who disconnected youth are, the challenges they face, and where they live is the first step to helping them. Doing so is critical for all of us. Youth disconnection’s harms accrue not only to young people themselves, but also to society at large. Society pays a price in terms of reduced competitiveness, lower tax revenues, and higher health, social services, and criminal justice costs, to name just a few.

First, the good news: the national youth disconnection rate is falling! Fewer young people are cut off from school and work today than were before the Great Recession. The rate dropped 16 percent over five years, from 14.7 in 2010 in the aftermath of the Great Recession to 12.3 percent in 2015. This translates to roughly 900,000 fewer young people cut off from pathways that lead to independent, rewarding adulthoods.

Now, the bad news: youth disconnection is still a serious problem, with 4.9 million young Americans neither working nor in school. The gaps between racial and ethnic groups remain large; Native American, black, and Latino young people face higher disconnection rates than whites and Asian Americans at every income level. Place matters, too: the average disconnection rate in rural areas is much higher than in urban and suburban areas, and states, cities, and rural counties in the south tend to have higher rates than those in the north.

The maps and graphs on the interactive web page allow you to explore the latest youth disconnection data for yourself. What’s happening in your county? How are different racial and ethnic groups faring in your state? Which places are doing the best, and which ones are doing the worst? Are things getting better, and for whom? Find out! 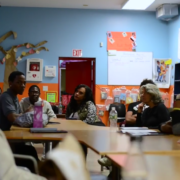 “Movements have been going on for a long time here in America. In order for a lot of things to change to take place here in this country, is because a lot of groups came together and fought for those changes. We’re working on issues that affect us,” Kim Pham, National Council of Young Leaders said, kicking off a listening session with East Harlem YouthBuild.

Throughout the session, which took place on February 28 in Harlem, New York, members of the National Council of Young Leaders, the steering committee of Opportunity Youth United, came together with members of East Harlem YouthBuild to share ideas and priorities for change.

They explored their individual approaches to making change, and the unique strengths that come from their backgrounds, experiences and personalities.

At the end of the discussion, YouthBuild members were invited to join Opportunity Youth United and work together in the movement to increase opportunity and decrease poverty for all young people.

“It’s going to take you to bring those issues up. Who else is going to be your voice?”